Friday morning, another early departure for us going northwest across Yellowstone to it’s western gate, to the town of West Yellowstone, Montana.   We get a campsite at the Baker Hole Campground in the Gallatin National Forest which is about three miles outside of West Yellowstone.  We managed to get a campsite with electric, a treat since we’ve gone a couple of weeks without now, it feels kinda good.

West Yellowstone was a surprise, it’s a busy town with a great museum, an IMAX Theater, lots of shops, especially fly fishing stores, guides and outfitters, many restaurants, bars, motels and Hotels.  It’s all about Yellowstone tourism, but the town still retains some rustic  western charm.


I found the “Wild West Saloon” which has live music on weekends and claims to have the best pizza in the Northwest.  We did the Pizza and I’ll just just say perhaps it's the best in West Yellowstone.  I went on both Friday and Saturday night to listen to the bands. Both bands were good but they are never going to make it to the big time.  In early August they are having a show that should be pretty special, “Soul Asylim” and the “Meat Puppets”.  I don’t know about the Soul Asylim, but I saw the Meat Puppets last year and they were freak’n great !


On Saturday, Twinkles wanted to stay in and so I did a solo trip into Yellowstone to a number of the Geyser Basins between Madison Junction and the Upper Geyser Basin.  It was very crowded at the Basins for parking and I ended up along the road at a couple of them.  The majority of the Geysers are unpredictable, in that they do not erupt at set intervals, so it is mostly luck to catch one erupting.  Actually, I find the hot springs to be more appealing due to the vibrant colors and paterns of the flows.  The boardwalks that go through the Geyser Basins were overly crowded with people, it was often difficult to maneuver around people focused on their camera shots, selfies and glamor shots of their wife or girlfriends.  I’m surprised there are not more accidents with people falling into the burning hot water. 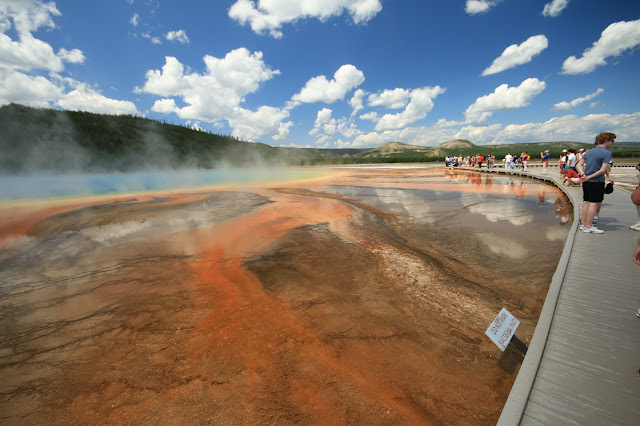 Sunday, we went back into Yellowstone for more Geyser Basin adventure at the Norris Geyser Basin area and then to the Mammoth Hot Springs.  They are totally different areas with Norris being mostly geysers, hot springs and steam vents.  Mammoth is these magnificent hot springs which have absorbed a high percentage of limestone underground which becomes calcium carbonate when it reaches the open air.  The Calcium Carbonate solution hardens into a material known as Travertine.  The Travertine can built up at a rate of up to three feet per year and forms amazing multi colored terraces.  These hot springs are constantly changing, moving, becoming active or going dormant. If you dig down through the top soil in this area of the park you will hit old Travertine terraces. Someday perhaps during an earthquake, they may come back to life ?

Monday started off sunny and cool as we went downtown to visit the really great Yellowstone Historic Center Museum.  The Museum is located in the old Union Pacific Rail Depot built in 1909.  The Union Pacific realized the business potential here for entry into Yellowstone and built a grand Depot and Dining Lodge which was heavily promoted.  The town of West Yellowstone grew up around the rail station and prospered. Prior to private cars there were stage coaches and then buses to take customers into Yellowstone Park.  The museum had very interesting exhibits on this period and especially the Pan American Exposition of 1915 where the Union Pacific railroad built an incredible Yellowstone exhibit.  The era of the train ended in 1960 and the buildings and land were deeded to West Yellowstone.

As we came out of the museum, it was dark, starting to rain and the temperature had dropped a lot, down to mid 40’s.  It rained off and on all afternoon with a low temperature of 34 degrees overnight.  A few weeks ago we were sweating in the high 90’s !

We spent about an hour at the visitors center using their WiFi overhearing lots of people coming in looking for hotels and campgrounds and being told that there is nothing inside Yellowstone.  Many of these people sounded pretty confused, from foreign countries, had no idea where to go and the people working at the visitors center had nothing definitive to tell them for help. There ought to be a better way ?


Next stop is Bozeman, Montana

Posted by Slick aka, Paul Everett at 1:41 PM No comments:


We are packed up and out of the campground at 7:30, our earliest departure ever, for Lizzard Creek Campground on the northern end of Teton National Park.  We will stay here a few days to explore the southern part of Yellowstone National Park.  This is a first come, first served campground and you need to be there early to get a campsite.  Again, we luck out and get one, only a couple left that fit us.  Actually a really nice site, fairly private amongst trees with a wildflower meadow going down to Jackson Lake.  It is dry camping again, but we have that well under control and don’t mind doing it.


This campground enables us to go into the southern part of Yellowstone National Park although it is considerable driving.  We take off at 10:30 for Yellowstone and end up at the “Old Faithful Geyser” area.  We see the Geyser erupt two times and also walk one of the loop trails into the geyser field.  There are active thermal things all over the place and very colorful.  This area of the park is really crowded, it took us about four passes through the parking lot to find a space.

We also toured the “Old Faithful Lodge” built in 1904 that is an amazing log structure designed by Robert Reamer which is a National Historic Landmark.


Our next adventure involves another long drive the West Thumb Geyser Basin area filled with Geysers, Mud Pots, Paint Pots, Cones, Springs and Pools next to and in the Yellowstone River.  It occurred to me reading the signs that we are walking on top of a ticking time bomb here that could explode at any time 100 times more powerful than the Mt. St. Helens Volcano.  There are boiling hot liquids and steam coming out of the ground everywhere with lots of warning signs to stay on the boardwalk as the crust of the soil is known to be thin.  Of course , we did see three idiots (alpha males no doubt) walking in an area right in front of a warning sign.  The experts say not to worry, but they have been wrong before ? 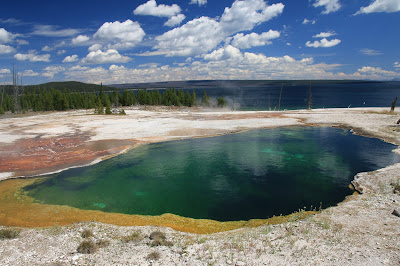 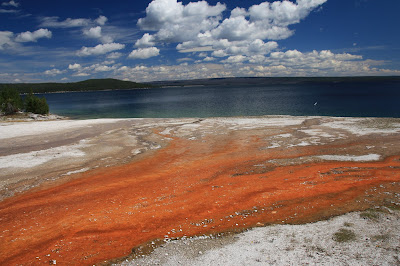 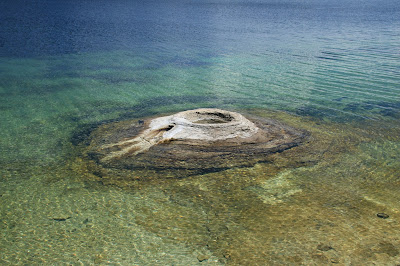 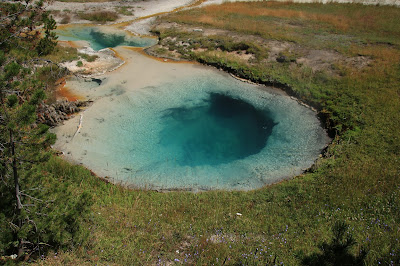 We then continue down the road along the huge Yellowstone Lake which is largest lake above 8,000 foot in North America.  In spite of all the thermal springs running into it the average water temperature is 45 degrees.  At the end of the lake is Fishing Bridge where the Yellowstone River exits.  We also stopped at the nearby Lake Lodge built in the late 1800’s that is another old rustic log classic lodge.  It has a great old porch with nice sturdy log rocking chairs.


The traffic in Yellowstone is horrendous and made all the more worse by the road resurface work they are doing that shuts down lanes for a couple of miles resulting in 1/2 hour delays.  It seems like this work could have been scheduled for spring or early fall, not the height of the tourist season ?

We returned a second day to the “Old Faithful” area to visit the visitors center with it’s state of the art touch screens, watch the movie and have lunch at the incredible Old Faithful Lodge.  The lunch was excellent and reasonably priced, but the ambiance of the dining room was the real attraction for me.  After lunch, we wandered around on the second and third floors.  The log construction of the structure is amazing to see along with this enormous central fireplace.

We then walked about 2 1/2 miles of the trails that snake around the various thermal geysers, vents, mud pots and springs.  There is something going on all the time, much more action than I expected. 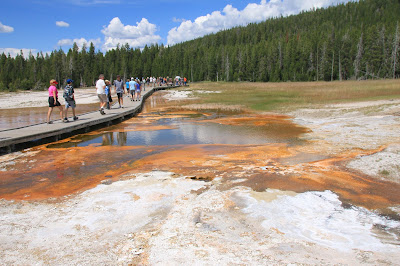 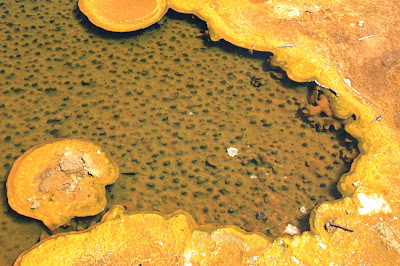 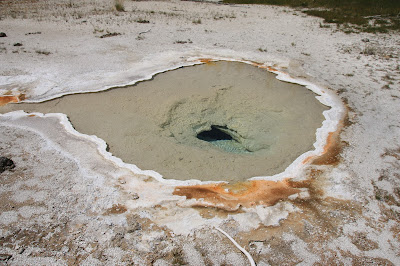 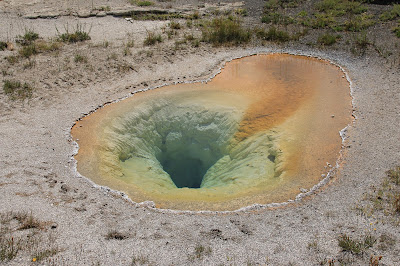 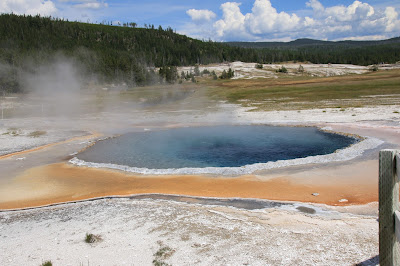 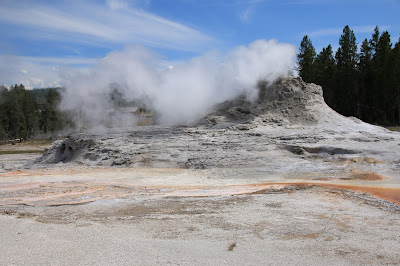 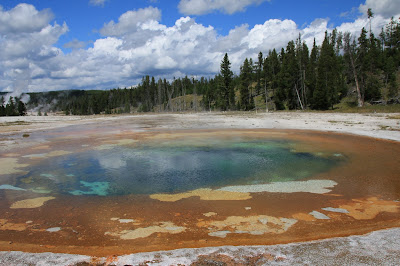 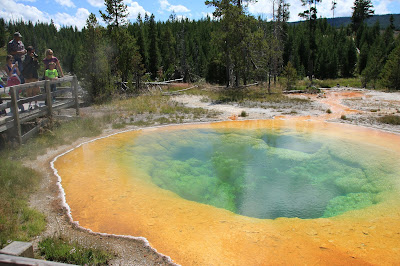 Next stop is West Yellowstone, Montana:
Twinkles and Slick
Posted by Slick aka, Paul Everett at 4:53 PM No comments:

Slick aka, Paul Everett
Box Elder, South Dakota
I have been full timing for 4 1/2 years now with my wife "Twinkles". Originally from New Jersey, but now in love with the west. Our main focus is exploring the natural and historical sights and the small towns in between. The road less traveled is my preference.