I suspect the ride from Lewistown to Billings, Montana on a clear day is quite beautiful, but on this day the air was so smoky and hazy that I couldn’t hardly see it.  It was all hay fields and cattle range along the route as I stopped for at roadside sign.  The sign got me thinking how cattle ranching really did change everything in the west and the end result is not all a pretty picture.  The landscape was a roller coaster ride for much of the way, up a steep incline, then back down, up, down over and over again.  The 70 MPH speed limit gave the hawk quite a workout.


As I came to the town of Roundup, I had to stop, take a few photos, no way to avoid it.  It’s a true western town, no fake store fronts, no tourist signs, the real deal.


Entering our destination of Billings from I-90 was not impressive, I’m hoping it’s the bad side of the city.  It doesn't quite look the Billings travel brochure ?

We then arrive at our campsite at the Holiday Inn.  Well, it's not really a campsite, more of a rough parking lot behind the hotel with an electric hookup.  The setting is a little scary, across from a casino and what looks like a welfare hotel.  You might wonder, why are we at the Holiday Inn ?
We had checked for RV Parks and found that they were few here and very pricey.  We then checked for free places such as Walmart, Pilot truck stops and other such places in the area.  In doing so, we read how the local KOA campground had complained to city management about the situation of allowing free overnight camping in town at such places.  As a result the city established new ordinances on overnight camping which allow a maximum stay of 10 hours, strictly enforced and very restrictive. We then learned of the Holiday Inn which has electric pedestals installed in a portion of their parking lot and they allow unlimited overnight stays for $25 a night.  We didn’t count on it being being quite as trashy looking, but we had no problems there although we probably wouldn’t do it again.


While I’m complaining I might as well mention the casino situation.  Every town in Montana has had these small tacky casinos on about every block with nothing but electronic game machines.  I don’t know when or how this all started, or if they collect a lot of tax revenue from this, but they are setting new standards for sleaziness.

Billings is another railroad town, but came about under strange circumstances.  The existing town of Coulson was in the path of the approaching Northern Pacific Railroad as it was being built.  The Coulson town fathers  were sort of greedy and inflated their property values greatly in anticipation of the railroad buying their property.  As a result, the railroad decided to start a new town virtually next door which became the city of Billings.  Billings was named for the president of the railroad, Frederick Billings.  After being ousted from the railroad, Billings and a group of investors started the Minnesota & Montana Land and Improvement Company, buying 90,000 acres of land and selling building lots in Billings.  Agriculture continues as the leading industry in Billings followed by Energy. The Billings area now has three oil refineries and business is booming due to the recent oil bonanzas in western North Dakota eastern Montana.

Billings is another place that Lewis and Clark  came through on their epic journey, Lewis craved his name in the limestone rocks nearby at a place they named Pompey’s Pillar.  Billings was and still is the home of the Crow and Cheyenne Indian tribes who have reservations in the area.

On Wednesday, after a breakfast at Cracker Barrel, always a favorite although we always notice that the clientele seem to be quite overweight. I had noticed the old guy there in a fancy suit going around handing out candy and talking to customers, but he didn’t approach our table.  On the way to the parking lot, Twinkles held the door for him and ended up having a conversation in which he gave her one of his informative binders.  He was quite the character, 96 years old, a former WWII B-17 pilot, a dedicated born again christian, now traveling around the country promoting his beliefs.  Reading his handout, I was alternately impressed and repulsed by his thinking. These people who are so fanatical about their religion are quite scary and dangerous.


Another weird sighting in Billings was this poster for a quilt and gun auction Gala, that an unusual combination.


We then go for a walk along the Rimrock Trail which follows the  bluff edge which was once the shore of an ancient sea, now overlooking the city of Billings.  One of Billings hero’s is Yellowstone Kelly who was a trapper, a wilderness guide, a military officer who was  buried on the highest point of the Rimrock.  I was distressed to see that his grave site and the park area is not maintained at all, very sad as he is an historic icon of the town.  We then went to the Boothill cemetery, another historic area that is also mostly unmaintained.
Our next stop was the Western Heritage Center housed in the beautiful former Parmly-Billings Library building opened in 1901.  It was vacant in the 1960's and almost demolished for a parking lot (why is it always a parking lot) , but ultimately  saved.
We also went to the Yellowstone Art Museum, which I had hoped would have much Will James art on display, but unfortunately it didn't.  They did have an outstanding Botanical exhibit done by scanning flower heads and plant parts using a carbon ink printing process that was beautiful, it made the museum visit worthwhile.


In the evening I checked out the open mike music session at Yellowstone Valley Brewing Company in downtown Billings.  It was the best session I have seen all year.  There is a six brewery walking tour in Billings along along a 1.5 mile route.  Montana has strange rules for these breweries, which they call tasting rooms.  They don’t need the expensive liquor licenses required of bars, but have limited operating hours from 4-8 PM only and can only serve each patron two pints.  The traditional bars have challenged these Brewery rules in court, unsuccessfully to date, claiming that the breweries are taking much of their business away.


We took a look at the Two Moon Park along the Yellowstone River.  It was pretty dumpy, but you can always find something of beauty.


Thursday evening I go downtown to the “Pub Station”, on old bus station converted into a live music pub.  A touring band from Tennessee, the “Black Lillies”, were playing. They were a talented band, good musicians, who sort of blend cowboy western and southern country together with a rock edge that sort of keeps everyone happy. 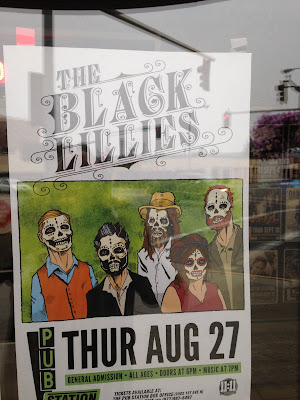 Goodbye Montana, next stop is Cody, Wyoming,
Twinkles and Slick

Posted by Slick aka, Paul Everett at 2:57 PM No comments:

A pleasant 112 mile trip on route 87 south through miles of wide open wheat and hay fields.  We must have seen a million round hay bales along the route in the fields.  We passed several small farming towns along the route, I only detoured through one, Stanford, which was a nice clean well manicured community.  A couple of the other town we passed looked less prosperous and half deserted.  A sign along the road told how the Great Northern Railroad promoted farming in the area which enticed many early farmers and businessmen to homestead and establish towns along the train route.  Of course the railroad made money from transporting their goods.


We arrived at the Mountain Acres Mobile Home and RV Park in Lewistown, Montana in early afternoon.  We were told to pick any campsite, all are full hookup sites, and then come to the office to register.  This is not the usual method in RV parks, but it works pretty well.  The campground had many open sites and it was a very easy set up. I then took a ride downtown and did my usual walking tour.  It’s a historic downtown with most everything built in the early 1900’s.  It still seems weird to me that the Euro-American history of the west is only about 150 years old, my mother or grandfather would have been a pioneer here.  This really is a nice town with all the necessities, probably the largest town within 100 miles. They just had a cowboy poetry festival, sorry to miss that, and it seems that the Chokecherry festival coming up in September is a big deal, not so sorry to miss that.

There are several nice old buildings as this was a very prosperous town in its early days.  It seems that most of the buildings were of stone or brick and have survived.  There is a beautiful Carnegie Library, Court House, Movie Theater and all of the old fraternal organizations are represented.


A trip to the hardware store was made to get some wall anchor inserts to reinstall the kitchen window shade which had fallen off during the
ride.  Screws going into thin wall board, typical shoddy RV construction.

We then took a ride into the Judith Mountains northeast of Lewistown to an area that has some gold mining history.  The first stop was the ghost town of Gilt Edge which was founded in 1893, had considerable gold, but was played out in the early 1900’s.  There are two buildings half standing by the side of the road, a very small jail building and a home that is said to have been the home for the ladies who kept the miners "comfortable" at night.  There are other ruins but they are on private property.  Continuing on the road you ride past the townsite of Maiden , which in 1888 was a thriving town of 1,200 residents.  It was short lived and by 1896 was down to 200 residents. Everything is on private property, you can’t see much, but it’s a nice ride into a mountainous area.

Near the campground is a auto shop filled with some great vintage vehicles, it's tempting me ?  I then have to take a side road to check out the wheat fields again.

We had quite a time finding a reasonably priced campground for our next stop, more will be revealed about that latter.

Next stop is Billings, Montana,
Twinkles and Slick

Posted by Slick aka, Paul Everett at 2:05 PM No comments:

Slick aka, Paul Everett
Box Elder, South Dakota
I have been full timing for 4 1/2 years now with my wife "Twinkles". Originally from New Jersey, but now in love with the west. Our main focus is exploring the natural and historical sights and the small towns in between. The road less traveled is my preference.